Networking & The Need To Pee

What to do, what to do. I was one double shot oat milk latte and iced green tea down during a marathon writing session at my favorite coffee shop when I could not hold my pee any longer and had to get up and use the restroom.  But I was torn.  Having frequented this coffee shop at least 30 times in the past year, I knew the restroom didn’t have a hook for a handbag or a place for me to set down my laptop and notebook and I wasn’t about to put my gear on the floor.  (Have you SEEN those undercover news investigations using black lights scouring for germs in public bathrooms?) Not to mention, I would lose my coveted window/bench seat if I got up.  After reporting on numerous brazen laptop thefts in the Bay Area, leaving my stuff behind was out of the question.

It was a trifecta of first world problems.

Finally, when my bladder could not take it any longer, I looked around and decided to ask the woman next to me if she could watch my things for 2 minutes while I used the facilities. Clad in a beautifully tailored skirt suit, she was in a typing in a hyper-focused, trance-like state on her MacBook and noshing on a toasted ham, gruyere, and caramelized onion sandwich.  Without taking her eyes off the screen, she said “absolutely”.   I prayed she wasn’t going to run off with everything, but also figured she was dressed professionally and already had a laptop so I’d take the chances.

When I returned, the woman had gone from frantically working to frantically searching for something, eyes darting every which way.  Turns out her computer battery was about to die, she was about to pitch a project to a big company in less than 10 minutes and the nearest outlet was way across the cafe behind the barista.

“Can you watch my things while I go plug this in?”

Realizing the role reversal and teamwork we burst out laughing.

With perfect timing 10 minutes later, her computer now at 8% battery, the woman returned just moments before the person she was meeting with strode through the door and sat down at the table. She winked at me and I gave her the “thumbs up” sign for good luck.

As I was typing away (now on my third caffeinated beverage) I couldn’t help but overhear what the women were talking about. In between the small talk and discussion about what they were drinking, I heard snippets of famous names, well-known social events and a travel schedule that sounded like this person was on the road 24/7.  Turns out, the woman who watched my things owned a marketing company and her husband was a famed chef in the city.  The woman she was pitching to was one of the big wigs at one of the largest restaurant groups in the country!

I really wanted to learn more about these accomplished ladies.  So when it came time for me to get up and leave (my brain had hit a writing wall)  timed it so there was a lull in their conversation and using the line “That was some good restroom/computer charging teamwork!” started a conversation. We made introductions, exchanged cards and I followed up with both a day later, offering to be their point of contact in the media whenever something newsworthy came up.

While we haven’t worked together yet, I know there will be a time when I want to go to this woman’s husband’s fried chicken restaurant.  Or get a signed cookbook from the other woman for a charity auction.  There’ll be a time when they may want to do a cooking demo for our newscast. Or we may end up just wanting to hang out. Who knows.  But it just goes to show you never know who you’re sitting next to, and what can happen when you have to pee. 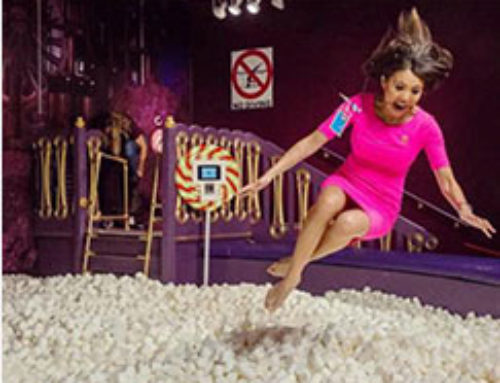